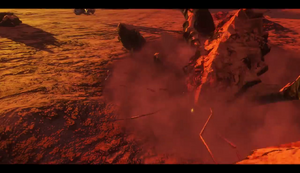 Aliens are life-forms found on planets and moons alike. Currently known species include various types of arthropods, usually hostile when approached. Some genera are nocturnal and very aggressive, mostly capable of locating an astronauts position. Some types tend to prefer dark caves, which they use as breeding and feeding grounds.

Currently known life-forms living on Proteus 2 are very aggressive and pose a serious threat to small colonies early on, due to the lack of proper defense systems.

Encounters with aliens can vary in difficulty, primarily depending on the options selected in the customization screen. Moving the sliders will impact alien health (how much damage they can absorb before they die), alien attack damage (how much damage they deal to the player) and their overall numbers. Moving the alien slider to the left (none) will not spawn any creatures, except for the giant worm.